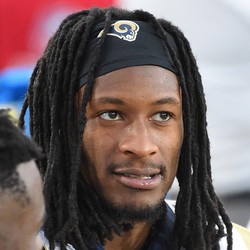 The Rams offense was in complete disarray last year, as their offensive line started to crumble, which dragged Gurley's efficiency down the drain. He did show that he's still able to handle a big workload down the stretch, finishing with 98 touches over the final five games. Now going to the Falcons, who have one of the better offensive lines in football, with little competition, Gurley could return to RB1 status. It's a high-scoring offense where the running backs have averaged 1,383 yards and 9.7 touchdowns on the ground, while averaging another 572 yards and 4.7 touchdowns through the air over the last three years. With Ito Smith and Brian Hill the only running backs behind him, Gurley should receive most of the work/production.

Todd Gurley can do it all for Atlanta, but is he even fully healthy?

Atlanta Falcons OC Dirk Koetter told the media in a press conference that he believes newly-acquired RB Todd Gurley “can do everything. The main question is - and no one seems to know - what’s his health status?”

This is eye opening to say the least. Gurley has yet to take a physical for the Falcons and now his offensive coordinator is saying that nobody knows about the status of his health. Koetter did go on to say that, “he can do everything. He’s an excellent runner, he’s good in the pass game, he can protect.” There’s no doubt the 25-year old back can be a three-down workhorse for Atlanta, but only if he’s fully healthy. Gurley is ranked #15 in FantasyPros consensus RB rankings, but could easily crack the top-10 with a clean bill of health in a high-powered offense across 16 games in 2020.

Deposit $10 at a DFS partner site you have NOT played at and get a FREE 6 Month HOF Subscription!
Claim Offer
Who Should I Draft?
Most Accurate Experts
for Todd Gurley
Consensus Rankings
View All Rankings
Do Not Sell
Are you looking to contact Customer Support about a subscription or account related question?
Yes
No, I'm a California resident looking for the California Consumer Privacy Act form