Most owners in redraft leagues are faced with the question of when to ultimately draft a quarterback. Although the fantasy football landscape has more readily incorporated Superflex or alternative rules to increase quarterbacks’ values, the majority of leagues limit teams to one starter at the position. As such, there are generally just 10-12 quarterbacks started each week, so it’s critical to draft your star player early or wait and select a consistent supporting piece for the rest of your team.

This article is the first of a four-part series that I started last year, in which the four major position groups (i.e., QBs, RBs, WRs, and TEs) are analyzed, with their 2019 average production and volatility illustrated and discussed. There are four quadrants for any given position: high-risk, low-reward (HRLR), high-risk, high-reward (HRHR), low-risk, low-reward (LRLR), and low-risk, high-reward (LRHR).

Although players in the LRHR quadrant are most desirable in a vacuum, individual costs may change your perception.

The visualization below shows FantasyPros’ top 12 quarterbacks, per average draft position (ADP), as of June 28. According to PFF data, on average, these 12 QBs generated 20.6 fantasy points per game (PPG) in which they had at least 12 dropbacks, with a standard deviation (SD) of 7.8 points, producing a 37.7% coefficient of variation (CV). That’s the statistical measurement of SD versus PPG (e.g., the lower a player’s CV, the less risky the player). This means that the average top-12 quarterback should score between 12.8 and 28.4 fantasy points each week. That said, this level of volatility, when considering price, may not attract every fantasy owner, as everyone has varying levels of risk and reward tolerance. 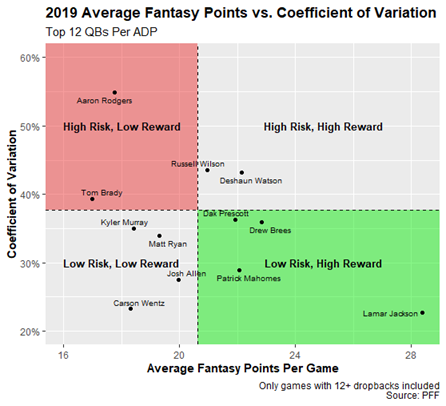 Lamar Jackson (BAL): 28.4 PPG, 6.5 SD, 22.7% CV
Jackson lit the world on fire last season, improving greatly upon his rookie year and running away with the NFL MVP award. While Jackson will require a high draft cost even in 1QB leagues, his immense weekly consistency — both in terms of total production and limited volatility — should return worthwhile value.

Drew Brees (NO): 22.8 PPG, 8.2 SD, 35.9% CV
Although I prefer drafting dual-threat guys like Jackson or Deshaun Watson in fantasy, there are some pocket passers like Brees worth selecting. As just the QB11 per ADP, Brees offers immense upside with limited capital and opportunity costs to acquire him. He’s undoubtedly one of my favorite targets in the mid-to-late rounds if his ADP remains in the 80s-90s.

There are several signal-callers that you should probably avoid as starters at their current ADPs, unless you believe they’ll improve greatly from last year. Nonetheless, the following QBs generally offer a worse combination of weekly production versus risk considering their draft costs.

Josh Allen (BUF): 20.0 PPG, 5.5 SD, 27.4% CV
Josh Allen is at the center of many offseason NFL debates, with supporters pointing toward his incredible arm strength and unique athletic ability. His ability to scramble out of the pocket and pick up extra yards with his legs may be second to only Lamar Jackson, which isn’t a hindrance by any means. However, Allen’s erratic accuracy and questionable decision-making (yes, I still remember his lateral in the playoff game against the Texans) may leave fantasy owners regretful after using sixth or seventh-round picks to acquire him.

Aaron Rodgers (GB): 17.8 PPG, 9.8 SD, 54.9% CV
Aaron Rodgers is another player who often finds himself in the middle of fierce debates, usually regarding whether he’s still among the elites or past his prime. The Packers’ selection of Jordan Love in the first round of this past draft suggests that they lean toward the latter, but fantasy owners still believe in a potential Rodgers rebound in 2020. However, with an ADP in the 60s-70s, one of the worst receiving corps in the NFL, and a coach that seems intent on “establishing the run,” I’m fading Rodgers unless he falls in my drafts.