No fantasy football facts and figures article in 2020 should begin without addressing the big, fat, viral elephant in the room.

While I would’ve liked to begin my first “By the Numbers” column on a lighter note, it feels negligent not to mention COVID-19, the disease that has ravaged the country and upended every American professional sports league’s plans in 2020.

There have been more than 6.3 million confirmed COVID-19 cases in the U.S. since the coronavirus was first diagnosed in the country in January, and while there’s optimism on the testing and vaccine fronts, we’re not out of the woods yet.

With the virus providing a cloudy backdrop to a tenuous NFL season, it’s imperative fantasy managers are even more risk-averse in crafting rosters this year than in years past.

When and if players do get sick, what will the implications be for those players and for the fantasy managers who roster them?

That question leads us to our first number to know for the 2020 NFL season.

The CDC quarantine recommendation after a positive COVID-19 diagnosis has consistently been 10-14 days, although that could change depending on what type of testing or treatment becomes available during the NFL season.

Generally speaking, players who test positive for COVID-19 should be expected to miss at least two games depending on the severity of their case. Invest in insurance plans wherever possible, and keep your phone nearby for breaking news that could affect your fantasy roster.

OK, now on to the football stuff.

Speaking of insurance plans, Kareem Hunt is the highest-ranked backup running back, according to FantasyPros’ handcuff tool. Still, his receiving usage could make him just as valuable as starter Nick Chubb in half- and full-PPR formats in 2020.

Hunt returned from suspension in Week 10 last season and totaled 44 targets in eight games, good for sixth among running backs during that span. He averaged 10.4 half-PPR points (12.7 PPR) on the season and out-snapped Chubb in three of his eight games, which partly contributed to Chubb’s fantasy decline in the second half of last season.

After Hunt joined the team, Chubb averaged 12.3 half-PPR points per game, down from his 17.4 average during the Browns’ first eight games of the season.

The Packers drafted A.J. Dillon to be a short-yardage complement to Aaron Jones and Jamaal Williams, but the former Boston College Eagle comes to Green Bay with significant tread on his tires, having carried the ball 845 times during his collegiate career. Be wary of rostering Dillon (even in dynasty formats), as Packers head coach Matt LaFleur has already stated he wants to have a three-headed rushing attack in 2020. 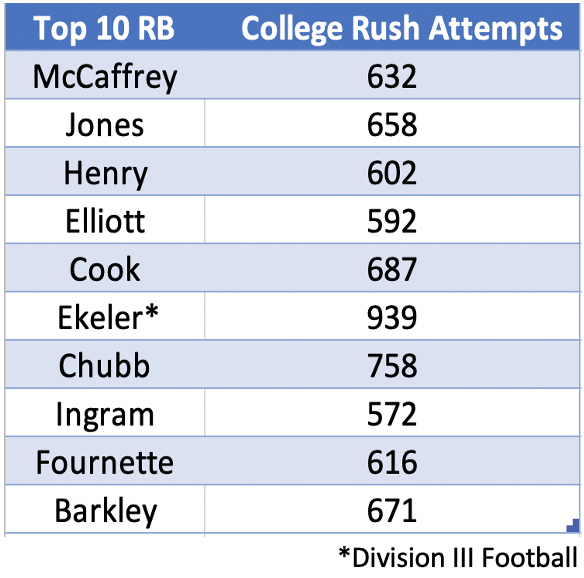 Throughout his and Jones’ three years in Green Bay, Williams still leads Jones in offensive snaps, 1,351 to 1,288. Williams’ role isn’t disappearing anytime soon, which means #FreeAaronJones could quickly be joined by #FreeAJDillon on social media.

In the second half of last season (Weeks 9-17), A.J. Brown averaged 15.9 half-PPR points per game, which ranked third among receivers behind Michael Thomas and DeVante Parker (minimum five games). Brown accomplished this feat despite ranking 41st among wide receivers in targets during that span, a fact that underscores just how good he was after the catch in his rookie season.

According to NFL Next Gen Stats, Brown led the league with 4.9 yards after catch (YAC) above expectation, which ranked a full two yards better than the next-best player on the list. With more targets in 2020, Brown could reach fantasy superstardom if he can maintain his post-catch physicality.

Despite missing four games last season to a turf toe injury, Packers wide receiver Davante Adams totaled 21 red-zone targets, good for fourth-most in the league. In 2018, Adams led the league in the same category with 32 targets, and he ranked fifth with 24 red-zone targets in 2017.

While Michael Thomas gets all the hype, Adams, who, like Thomas, has averaged 10 targets per game over the past three seasons, could represent similar value at his ADP. 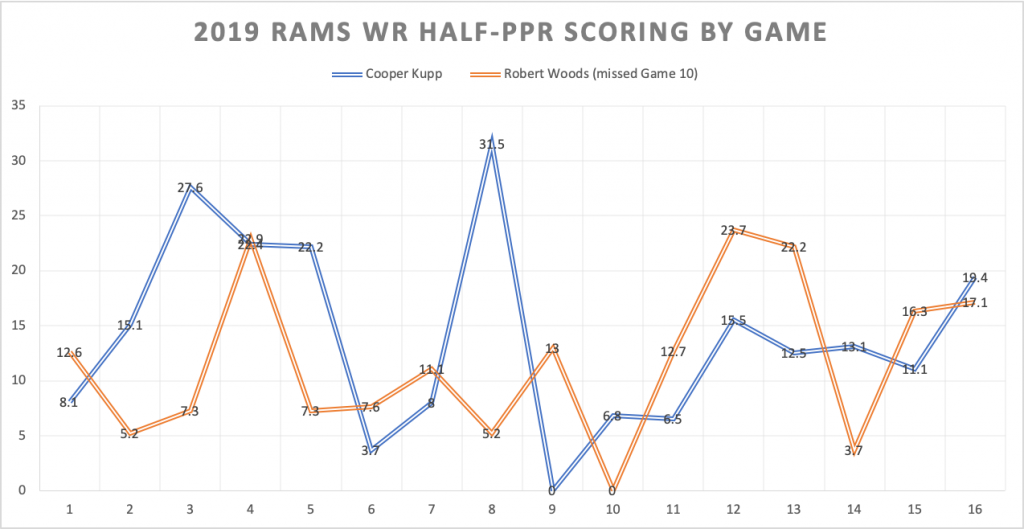 Many fantasy analysts have used that schematic shift from head coach Sean McVay as evidence of Kupp’s flop potential in 2020. Still, I’m betting McVay will find creative ways to keep the veteran slot receiver involved this season. While Robert Woods has been a draft darling all offseason, I’ll be keeping a close eye on Kupp, whose revitalized usage would once again make him a mid- to high-end WR1.

When the Houston Texans face the Kansas City Chiefs on Thursday, 221 days will have passed since the Chiefs beat the San Francisco 49ers in a thrilling Super Bowl comeback victory for the ages. It seems like decades since we last saw professional football on our television sets, but rest assured, the wait is over.

How Valuable will Devontae Booker be? (2020 Fantasy Football)