If you love DFS and can’t get enough of it, chances are you’ve heard of single-game contests (called Showdown on DraftKings). Whether you’ve ventured into the realm of these contests or not, we’re here to fill you in on the basics and provide some tips and tricks for setting your best lineups.

The Basics
Before you get started, you’ll want to know how your roster options, scoring, and salary cap. On FanDuel, you’ll have a $60K salary cap to set your five-man lineup. Each roster consists of one MVP and four flex positions that can be made up of any player from either team. Kickers are available, but team defenses are not. 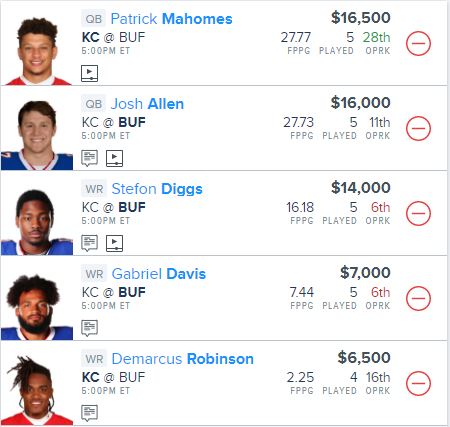 The MVP (player at the top of the lineup in the screenshot) earns 1.5x his normal point total, and each player’s price remains the same whether used as the MVP or used as a flex. Scoring is four-point per passing touchdown, half-PPR. For full scoring rules, you can click here.

Strategy
Because the MVP doesn’t cost any extra money, the rule of thumb in FanDuel contests is to select the player who you think will score the most points. This often leads to very chalky MVPs, but that’s ok. It’s what you want. The real magic happens with the next four players. It’s time to get flexy…

So, you’ve selected your MVP, and you’re ready to move on to the next group of guys. FanDuel typically prices its studs pretty affordably, so if you want to stack two or three top-tier guys, you’ll be in business to do so. If you’re playing in a cash game, shoot for high-floor players who don’t carry too much risk. You just need to finish in the top half of entrants to cash. If you’re playing in a tournament, shoot for the stars my friend!

As you can see from the sample tournament lineup above, I played Patrick Mahomes as my MVP (he wound up as the game’s highest scorer), stacked him with Josh Allen and Stefon Diggs (two high-priced studs), and rounded out the lineup with a pair of values. Davis wound up flopping, but Robinson led Kansas City in receiving and proved to be a solid play at his salary.

That brings us to price exploitation. FanDuel doesn’t always update its prices accordingly based on recent news and injuries, resulting in Robinson being a value play. With Sammy Watkins out for the given week, Robinson saw a big increase in targets and subsequent production, but his price was still near the bottom of the barrel. Always be on the lookout for price disparities like this, as you can get a ton of value. Injuries, volume increases, or great matchups can all guide you in the right direction.

The Basics
DraftKings is a bit different than FanDuel. For DraftKings Showdown contests, you get only $50k to build your six-man lineup, so you have less money and more spots to fill than you do in FanDuel. The roster spots are made up of a Captain (equivalent to FanDuel’s MVP) who scores 1.5x his normal point total, but on DraftKings, this player also costs 1.5x his normal salary.

To make up for the lesser salary, additional players needed to fill out the roster, and cost of the Captain, salaries on DraftKings can go as low as $200, while the minimum on FanDuel is $5k. Scoring here is four-point per passing touchdown, but full PPR. For a complete list of rules and scoring, you can click here. Additionally, the player pool on DraftKings also includes team defenses, which are typically affordable options with big upside in the right matchup. These widely-varying salaries and ability to roster defenses can lead to plenty of different lineup combinations. Let’s talk strategy!

Strategy
Because the MVP costs 1.5x more on DraftKings and because there is such a price disparity among the top options and the mid-to-low-range guys, the strategy in DK Showdowns boils down to one word: value.

Some players cost as little as $200. There’s a reason for that, but if you want to take a chance on some of these guys so that you can pack the rest of your lineup with studs, it’s not a bad idea. This is only in play for tournaments, so if you’re looking to get the edge, pick intelligently. Byron Pringle is fourth or fifth on the Chiefs’ WR depth chart. But with Sammy Watkins out of the lineup, he saw some additional snaps. He finished the day with a 2/46 receiving line that netted him 16.5x value on the day. With that $400 spent, you’re left with $59.6K to spend across five additional players, which gives you plenty of options. If Pringle finished the day with no points, you haven’t lost much because of the low, low price. It’s a win-win for tournaments.

In FanDuel lineups, the MVP needs to be the player who scores the most points, but on DraftKings, your Captain needs to be a player who has a good shot at putting up solid numbers and can save you some coin. Using Patrick Mahomes as my Captain here would have cost me $19.5K ($13K x 1.5), severely limiting my options across the other five roster spots. Using someone else such as Mecole Hardman enabled me to play a number of higher-priced studs.

Hardman finished the game with zero points, but what if I had played someone like Demarcus Robinson ($3K) at Captain ($4.5K) rather than Patrick Mahomes? Would that have really been a value for the salary? Let’s take a look.

Scenario 1 netted us more points, but the value was better in Scenario 2, plus we had an extra $5K lying around. In this case, we’ll give the clear edge to scenario 2.

Ok, so we looked at a very low-cost Captain compared to a very high-cost Captain. What if we would have gone with Travis Kelce?

Using this example, our best value fell with using Kelce at Captain, and it saved us some coin.

These are not end-all, be-all solutions to lineup-setting on DraftKings Showdown contests, because if Mahomes had scored two more touchdowns, it would have been a better value to have him in at Captain. Plus, having more salary cap remaining is worthless if you don’t use it on the right guys.

These scenarios are simply an exercise to explain that value (especially at Captain) is so vital to success in DraftKings showdown contests.

Single-game contests on FanDuel provide you with more money to spend at each position ($12K), and because the MVP doesn’t cost anything extra, it’s crucial to play the guy who you believe will score the most points. In DraftKings Showdown contests, there is less money to go around at each position ($10K), and because the Captain costs additional salary, it’s especially important to find value plays. The Captain does not always have to be the highest-scoring player in these contests. It’s important to find value plays on both sites, but salary, roster spots, and cost of the Captain/MVP means you have to adjust your strategy depending on where you play.