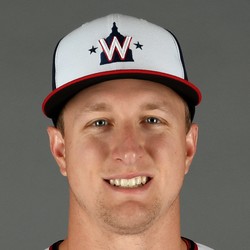 Andrew Stevenson was removed from the Nationals' game against the Brewers on Monday with back spasms.

The Nationals are dropping like flies, and Stevenson, who grabbed his back during an at-bat, is just the latest casualty. Michael Taylor, himself battling a wrist injury, replaced Stevenson in the lineup.

Andrew Stevenson came to the plate and had a two-run game-tying pinch-hit home run Tuesday night.

Stevenson was called to Washington yesterday and came on as a pinch-hitter in the 6th. He could see more playing time as the Nationals seem to have waved the white flag on the season with the trades of Matt Adams and Daniel Murphy yesterday.

Andrew Stevenson gets the start in CF over Michael Taylor on Tuesday. Taylor's slash line sits at .186/.253/.310 on the season. He had strung together a 4 game hitting streak on last week's road trip until he went hitless in the series finale in Arizona. Stevenson hasn't played in as many games but has a slash line of .263/.302/.316.

With Taylor's bat so cold to start the season and the injury bug having bitten the Nationals, Stevenson will get the start on Tuesday. There are plenty of other outfielders that you'd be better off starting than Stevenson against the Yankees.

Andrew Stevenson went 4-for-5 with two doubles, four RBI, a walk, and two runs scored Wednesday vs. the Giants.

The 23-year-old Stevenson was the Nationals 12th best prospect coming into the year. He had a terrific spring, batting .250/.308/.458 with two homers and four doubles in 48 at-bats. He showed an ability to adjust at every level in the minors and could be productive major league. However, he is unlikely to carry much fantasy value in the limited at-bats he should see in the Nationals outfield.