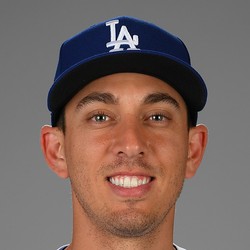 Barnes has been a pre-season fantasy sleeper for a couple of years now but has yet to live up to expectations. He has hit just .196 with a .616 OPS this year and will attempt to find his swing in the minors. Will Smith has been called up as a corresponding move.

Austin Barnes went 3-for-4 with a homer, a double, two RBI, and two runs scored as the Dodgers beat the Giants 9-8 on Thursday.

Barnes' homer was a two-run shot off Madison Bumgarner. The 29-year-old had been scuffling a bit entering this one, so this was a much needed performance. Still, Barnes has just a .222 average and a .705 OPS. He isn't must-own in single-catcher formats.

Austin Barnes went hitless in three at bats on Saturday as the Dodgers lost to the Cubs, 2-1.

Barnes is just 1-for-16 since coming back from his groin injury. It's understandable why he would be rusty but Barnes doesn't need to be owned in single-catcher fantasy leagues right now.

The Dodgers activated Austin Barnes (groin) off the IL on Thursday.

Barnes only missed the minimum 10 days on the IL. Will Smith was optioned to Triple-A in a corresponding move.

The Dodgers have placed Austin Barnes on the 10-day IL with a groin strain.

Barnes suffered the injury during Sunday' game. The good news is it isn't expected to require an IL stint longer than the minimum 10 days. The Dodgers called up catching prospect Will Smith to take his place.

Brendan Tuma - Too Much Tuma39 weeks ago