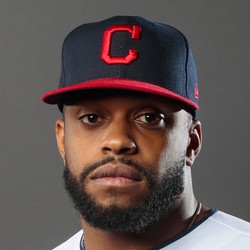 Delino DeShields was traded to the Indians as part of the deal that sent Corey Kluber to the Rangers.

DeShields has been a popular target in fantasy circles given his stolen base upside and decent OBP, but he hasn't been able to do enough with the bat to carve out a consistent role (.668 career OPS). His departure from Texas opens the way for Danny Santana to see regular time in center field. DeShields role in Cleveland isn't clear at this time, but he could continue to be a depth piece as a fourth OF. In that case, he wouldn't carry much fantasy value entering the new season.

Delino DeShields went 0-for-3 with an RBI, a run scored, a stolen base and a walk in Saturday's 8-6 loss to the Athletics.

Delino DeShields went 1-for-4 with a three-run home run in Monday's 7-0 win over the Yankees.

DeShields has just four homers in 340 plate appearances this season. Known for his speed, he is worth owning in most leagues if you need help with stolen bases. DeShields is slashing .250/.334/.356 with 29 RBI, 35 runs scored and 20 stolen bases in 99 games this year.

Delino DeShields went 2-for-4 with a double, two RBI, and a stolen base in Wednesday's 7-6 win over the Angels.

DeShields has swiped four bags in his last five games, and now has 20 thefts on the season. He is worth a pickup in all leagues if you need help in stolen bases. DeShields is slashing .261/.348/.368 with three home runs, 26 RBI, and 32 runs scored in 306 plate appearances this season.

Delino DeShields went 2-for-5 with two stolen bases in Monday's 8-7 win over the Angels.

DeShields has now swiped six bags in the month of August, giving him a total of 18 on the season. He is only worth a pickup in fantasy if you need help in stolen bases. DeShields is slashing .258/.348/.365 with three home runs, 24 RBI, and 31 runs scored in 297 plate appearances this season.