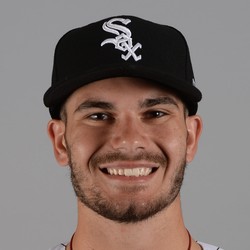 Dylan Cease told reporters Monday that he should be ready for 5-6 innings per start come Opening Day.

Some teams have come out and said their starters will have innings limits early on, but several pitchers around the league believe they'll be ready to go sooner than most. Cease registered a disappointing 5.79 ERA over 14 starts as a rookie last year. However, he has been a top prospect in the past so it would be foolish to give up on him already. Yasmani Grandal signing with the organization should be a boost to the entire Chicago pitching staff.

Cease struck out three and walked three in the game. The young right-hander has plenty of upside in his arm but he continues to struggle with his control. Cease is expected to be part of Chicago's Opening Day rotation.

Chicago White Sox right-hander Dylan Cease allowed just one run over four innings in a 5-1 win over the Brewers on Wednesday.

Cease struck out five in the start. The young right-hander had some struggles in the big leagues in 2019 but he has plenty of upside if he can get his walks under control.

Chicago White Sox right-hander Dylan Cease pitched well in a 10-1 win over the Tigers on Friday. Cease allowed just one run over six innings while striking out eight.

Cease walked just two in the outing, an encouraging sign for the rookie who has struggled with his control at times. He now has a 4-7 record, 5.79 ERA, 1.55 WHIP, and 81 strikeouts in 73 innings. Don't let the lackluster stats fool you, Cease has a lot of potential for next season.

Chicago White Sox right-hander Dylan Cease pitched well in a 2-1 loss to Seattle on Saturday. Cease allowed one run over five innings while striking out five and walking three.

Cease still struggled with walks, as he has allowed 33 in 67 innings this season. That being said, the strikeout upside is real as evidenced by his 73 punchouts in his rookie year. Cease will be an interesting streamer in his next start, which comes against the Tigers.

Matthew Terelle43 weeks ago
Who Should I Draft?
Do Not Sell
Are you looking to contact Customer Support about a subscription or account related question?
Yes
No, I'm a California resident looking for the California Consumer Privacy Act form