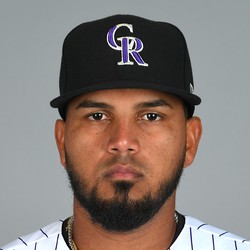 German Marquez allowed two runs on three hits over three innings of work on Friday against the Diamondbacks.

Marquez struck out three and allowed one walk in the outing. The 25-year-old has now given up two runs through six innings this spring. Marquez posted a 4.76 ERA last season and, like most Colorado hurlers, faired much better on the road than at home.

The Rockies placed German Marquez on the 10-day IL with right arm inflammation.

Marquez was apparently dealing with the issue in his last start versus the Cardinals. The 24-year-old hasn't been as good this season as he was last year, registering a 4.76 ERA through 28 starts. It's unclear how long he will be sidelined for.

German Marquez improved to 12-5 on Saturday versus Miami, striking out eight while allowing two runs over five innings pitched.

Marquez allowed five hits and one walk as the Rockies went on to win 11-4. The 24-year-old remains a risky fantasy option whenever he pitches at home. However, his next start comes on the road versus the Cardinals, so feel free to keep him locked in your lineups.

German Marquez improved to 11-5 on Sunday against the Padres, allowing just three runs on five hits while striking out nine over eight innings pitched.

Marquez also allowed two free passes but the Rockies went on to win 8-3. The 24-year-old has been a very usable fantasy option away from Coors Field this season but has been un-startable when pitching at home. His next outing comes against the Marlins in Coors. It is as good of a matchup as you can get while pitching there, but fantasy owners might be best off playing it safe.

Marquez struck out four and didn’t walk anyone tonight but did allow two homers. He continues to be a disappointment based off where he was drafted back in March, though it was always going to be a tall task replicating the second half of his 2018 season. Marquez will carry a 4.82 ERA into his next outing against the Padres.

Brendan Tuma - Too Much Tuma35 weeks ago