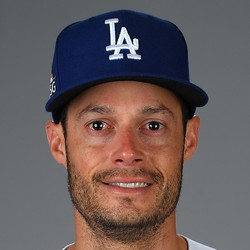 Joe Kelly struck out the side in the Dodgers' win over Cardinals Wednesday.

The former Cardinal looked dominant against his old team Wednesday, striking out Paul Goldschmidt, Marcell Ozuna, and Paul DeJong in order in the eighth inning. Kelly mixed his 98+ MPH fastballs with his nasty slider is finally starting to look like the guy the Dodgers paid $25M/3yrs to bring to Los Angeles. Despite the overall disappointing year (4.85 ERA), hopefully Wednesday's performance was a sign of things to come.

Joe Kelly's X-rays on his right wrist came back negative.

Kelly got hit on the wrist by a Charlie Blackmon line drive comebacker. He left the game so the Dodgers could evaluate him, but the fact that his X-rays are negative likely means he'll only miss a day or two of action.

Joey Kelly allowed four runs in 1 2/3 innings on Monday versus the Giants as the Dodgers went on to lose 4-2.

Kelly just didn't have it in this one as a weak-hitting San Francisco lineup was able to get to him. The outing spoiled a brilliant start by Julio Urias. Kelly is still worth rostering in leagues that count holds but obviously his performance will need to improve.

Joe Kelly allowed one hit and struck out one in a scoreless inning versus the Cubs.

Kelly signed a three-year deal with the Dodgers following his big post-season with the Red Sox. He'll work behind Kenley Jansen in a set up role and should offer value in holds leagues right away.

Joe Kelly has agreed to a three-year deal with the Los Angeles Dodgers worth $25 million.

Kelly recorded a 4.39 ERA and 68 strikeouts in 65 2/3 innings pitched for the Champion Red Sox in 2018. Despite the disappointing regular season he did throw six shutout innings in the playoffs for the club, he'll certainly add depth for the Dodgers bullpen that had a lot of struggles through last season when Kenley Jansen was on the disabled list.

Kamran Hoda2 years ago
Who Should I Draft?
Do Not Sell
Are you looking to contact Customer Support about a subscription or account related question?
Yes
No, I'm a California resident looking for the California Consumer Privacy Act form