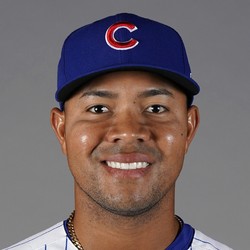 Jose Quintana allowed three runs while striking out one across two innings in Tuesday's 11-10 Cactus League loss to the Rockies.

Quintana struggled in his Spring Training debut, yielding three runs in only two innings of work. He was recently battling the flu, which could be reason for his poor start. Quintana is coming off a down season in 2019, where he owned a 13-9 record with a career-worst 4.68 ERA across 32 starts. The 31-year old is currently the 103rd pitcher on the expert consensus rankings, and is mainly a back-end rotation filler in all league formats.

Quintana had a disastrous season, pitching to a 4.68 ERA and 1.39 WHIP. Nevertheless, the Cubs will stick with him for at least another year, and it's worth noting that his FIP was merely 3.80, largely in line with his career mark. Quintana will remain relevant in NL-only leagues, but should be largely out of mixed-league consideration by now.

Jose Quintana (13-9) took the loss Thursday against the Pirates, allowing seven runs on 12 hits over five innings, striking out four and walking none.

It was a tough ending to the season for Quintana, who ended with three straight starts allowing five or more runs. He'll end 2019 with a 4.68 ERA and 1.39 WHIP in 171 innings.

Jose Quintana allowed five runs on five hits and two walks while striking out four through 2.1 innings in a no-decision against the Cardinals on Saturday.

Quintana could not find his groove, allowing runs in the first, and third innings. He now owns a 4.55 ERA and 148 strikeouts through 30 starts this season. He'll take on the Pirates next on Thursday.

Jose Quintana allowed five runs on eight hits and one walk while striking out one through 2.1 innings against the Pirates on Sunday. He did not factor into the decision.

After two scoreless innings to start the frame, Quintana struggled mightily in the third, allowing seven baserunners before recording an out. He now owns a 4.37 ERA and 144 strikeouts through 29 starts this season. He'll take on the Cardinals next on Friday.