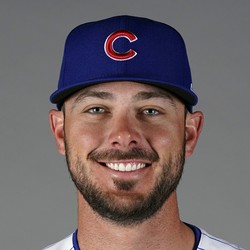 This was Ross' plan way back in February and he's sticking with it entering the shortened season. Anthony Rizzo will follow Bryant and bat second. The Cubs have struggled to find a consistent leadoff hitter in recent years, which has prompted the decision to use Bryant in an unorthodox spot in the lineup.

Cubs manager David Ross says he is committed to Kris Bryant as the team's leadoff hitter in 2020.

The Cubs have struggled to find a consistent leadoff hitter over the past couple of seasons and Bryant's OBP skills make him an interesting choice. This will likely lead to a decrease in RBIs for the former MVP but it'll certainly help maximize his plate appearances.

Following a sit down with Theo Epstein, Kris Bryant says he expects to remain with the Cubs for the 2020 season.

Bryant, who is scheduled to hit free agency after the 2021 season, was in trade rumors all off-season. However, it appears the Cubs will be holding onto the former MVP for now. In 2019 Bryant hit 31 homers, posted a .903 OPS, and drove in 77 runs.

Third baseman Kris Bryant lost his grievance against the Chicago Cubs in which he sought an extra year of service time, ensuring he won't become a free agent until after the 2021 season, according to a report from ESPN's Jeff Passan.

Bryant has been the subject of trade rumors this offseason, but the cloud of this grievance made his value tricky to determine since the acquiring team did not know if they were getting just one or two years of team control. Now, as frustrating as it is for Bryant, he is a much more attractive asset, and his trade market might pick up. In 2019, he batted .282 with 108 runs scored, 31 home runs, 77 RBIs, and four stolen bases.

Kris Bryant (ankle) and the Cubs avoided arbitration by agreeing to a one-year, $18.6 million deal Friday.

Bryant has been rumored to be traded all off-season, but he is in the middle of service-time grievance. Once the grievance issue is settled, trade talks could heat up for the 28-year old. Even if Bryant is dealt, his fantasy value should relatively stay the same. He slashed .282/.382/.521 with 31 home runs, 77 RBI, 108 runs and four stolen bases across 634 pate appearances in 2019. Bryant is still one of the most consistent producers in fantasy, and is a borderline top five 3B for 2020.

Brad Camara27 weeks ago
Who Should I Draft?
Do Not Sell
Are you looking to contact Customer Support about a subscription or account related question?
Yes
No, I'm a California resident looking for the California Consumer Privacy Act form