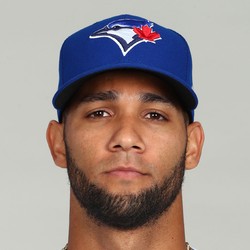 Lourdes Gurriel Jr. went 2-for-2 with two RBI and three runs scored in Wednesday's game against the Orioles

Both of Gurriel Jr.'s hits went for extra-bases, as he doubled twice. Already assured a spot in the opening day lineup, Gurriel Jr. is hitting .333/.400/.519 this spring.

Andy Zimmerman3 weeks ago
Lourdes Gurriel Jr. to start the season in the outfield

Gurriel had a breakout season in 2019 as he hit .277 with 20 home runs while battling through knee and quad injuries before being shut down due to appendicitis in late September. Gurriel is worth being drafted in deeper fantasy leagues if he has both infield and outfield eligibility.

Lourdes Gurriel went 2-for-5 with a solo home run, two runs and two RBI in the Blue Jays' 8-4 win over the Orioles on Thursday.

Gurriel has dealt with some injuries and streakiness but overall has had a good year at the plate for the Blue Jays. The 25-year-old infielder is hitting .284 with 20 home runs, 50 RBI, 52 runs scored and six stolen bases on the year.

Lourdes Gurriel went 2-for-3 with a double in his return to the Blue Jays' lineup on Saturday.

Gurriel had missed over a month with a quadriceps strain and made his return from the IL on Saturday. The infielder will be worth picking up in deeper fantasy leagues if he was dropped while he was hurt.

Lourdes Gurriel (quadriceps) felt good after running the bases Friday and could return as soon as Saturday, Keegan Matheson of MLB.com reports.

Gurriel ran the bases without issue on Friday and if he feels good on Saturday he will be activated. The Blue Jays plan to use him in the designated hitter spot initially to protect his quad. Keep an eye on updates.