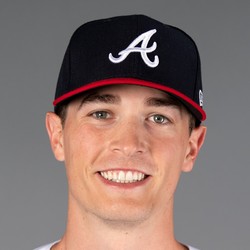 Braves starter Max Fried tossed 5 1/3 shutout innings in Saturday's win over the Giants, allowing five hits and no walks while striking out two. The win brings him to 17-6 on the season.

Fried has a 4.11 ERA on the season but has won an incredible 17 games despite the pedestrian earned run average. He continues to pitch well behind a strong Atlanta offense and should get a shot for his 18th win against the Mets in New York in his last start of the season.

Braves starter Max Fried allowed five earned runs on six hits and three walks while striking out two over 2 1/3 innings in Sunday's loss to the Nationals. The loss drops him to 16-6 on the year.

Fried has a 4.25 ERA but has managed to win 16 games for the Braves this season and has 166 strikeouts over 156 2/3 innings. He is scheduled to take on the San Francisco Giants at home in his next start.

Braves starter Max Fried allowed five earned runs on seven hits and one walk while striking out five over five innings in Tuesday's loss to the Phillies. The loss drops him to 16-5 on the season.

Fried has won 16 games despite an ERA that has hovered around 4.00 for most of the season, as he continues to pitch well enough to win behind a talented Atlanta lineup. He does have 164 strikeouts over 154 1/3 innings, so has been contributing more than just wins to fantasy owners. He will look to bounce back when he takes on the Nationals on the road in his next start.

Fried has had an excellent season for the Braves, going 16-4 despite an ERA that has hovered around 4.00 for much of the season. He has consistently pitched well enough to win and has bounced back from his rough outings. He will take a 3.86 ERA into his next start against the Phillies on the road.

Braves starter Max Fried allowed three earned runs on four hits and one walk while striking out 11 over six innings in Friday's win over the White Sox. The win brings him to 15-4 on the year.

Fried has now won six straight decisions to bring his record to 15-4 on the season. His 4.05 ERA doesn't inspire a ton of confidence, but he has 150 strikeouts over 142 1/3 innings and continues to pitch well enough to win behind a good Atlanta offense. He is scheduled to take on the Nationals at home in his next start.