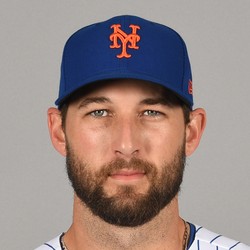 Michael Wacha and the Mets are reportedly closing in on a one-year contract.

We don't know the exact financial terms yet but the deal will reportedly be heavy on incentives. In 2019 Wacha posted a 4.76 ERA with 104 strikeouts in 126 2/3 innings.

Michael Wacha was removed from his start Wednesday with right shoulder tightness.

Prior to exiting, Wacha had allowed two runs in 1.2 innings. Wacha's status for the postseason is in jeopardy, and it's assumed that he won't pitch again until the playoffs.

Michael Wacha allowed two runs on four hits and two walks over 1.2 innings in Wednesday's loss to the Diamondbacks. He struck out three in the no-decision.

Wacha labored through 1.2 innings, and was removed before finishing the second. He's been largely effective as a quasi-opener for the Cardinals in September, but struggled a bit Wednesday. Overall, he holds a 4.76 ERA and 1.56 WHIP in 126.2 innings. It's unclear if the Cardinals plan to use him out of the bullpen, or as a starter, in the playoffs.

Michael Wacha did not factor into the decision in Friday's win over the Cubs, allowing one run on five hits and two walks across four innings. He struck out one.

Wacha did well enough to keep the Cardinals in the game, and the bullpen backed him up and brought the team to a close win. Wacha is 6-7 with a 4.68 and 1.54 WHIP in 125 innings, serving both a starting and long relief role. It is unclear if he will start again before the conclusion of the regular season.

Michael Wacha did not factor into the decision Sunday against the Brewers, allowing five hits and no walks in five scoreless innings. He struck out one.

Wacha kept things quiet through five innings, limiting the Brewers to five hits and not allowing a run to score. The Cardinals' bullpen would eventually cough up the lead. Wacha has a 4.76 ERA through 116 innings. He'll take on the Cubs next on Friday, which will be a pivotal series for the two teams.