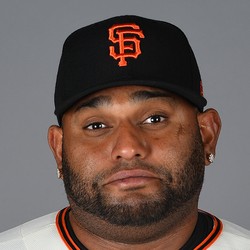 Pablo Sandoval (elbow) will debut as designated hitter Friday against the Rockies.

Sandoval has progressed as expected in his recovery from Tommy John surgery, and is expected to see game action at third base by late April. Sandoval won't have many opportunities to serve as the designated hitter for the Giants, so he'll likely serve as a switch-hitting bat off the bench until he's fully cleared to play the field.

The Giants have signed Pablo Sandoval to a minor league deal that includes an invitation to spring training.

Sandoval will earn $2 million if he makes the big league roster. The 33-year-old surprisingly posted an .820 OPS in limited action last season but underwent Tommy John surgery in early September. It remains to be seen if he'll be ready for Opening Day.

Sandoval has been sidelined about two weeks with a right elbow injury. His visit with Dr. Neal ElAttrache revealed that Sandoval will need Tommy John surgery. The procedure will end his 2019 season and keep him out for most of 2020 campaign. Sandoval finished 2019 slashing .269/.314/.509 with 14 home runs in 295 plate appearances.

The Giants placed Pablo Sandoval on the 10-day IL with elbow inflammation.

Sandoval has loose bodies in his right elbow, which will eventually require surgery. However, the hope for now is that he'll be able to return by the end of August. He was given a cortisone shot on Sunday.

Pablo Sandoval went 0-for-4 as the Giants fell to the Nationals on Wednesday afternoon.

Sandoval has actually been a pretty useful player for the Giants this season, batting .267 with 14 homers. Still, he isn't much of a fantasy contributor.