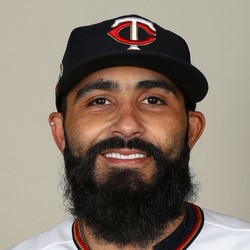 Sergio Romo is dealing with a minor shoulder strain and will be held out of action for a few days.

The Twins reportedly aren't worried in the slightest. Expect to see Romo back on the field soon. He is expected to begin the year as a setup man for Taylor Rogers.

Free agent reliever Sergio Romo has agreed to a deal with the Minnesota Twins, according to multiple reports. MLB insider Jon Heyman adds that the agreement is a one-year deal for $5 million, with a club option.

Romo started 2019 with the Marlins but was dealt to the Twins, and he ended the year with a 3.43 ERA over 60 1/3 innings. He won't serve as the regular closer in Minnesota, but he could see high-leverage innings.

Minnesota Twins pitcher Sergio Romo left Saturday's game against the Twins with an apparent injury, according to MLB.com's Do-Hyoung Park.

The injury didn't necessarily look like something small. As Park tweeted, Romo required assistance off being carried into the team's clubhouse and couldn't seem to put any weight on his left foot. It will be worth monitoring Romo's status moving forward.

Joey Oliver23 weeks ago
Sergio Romo picks up 20th save

Minnesota Twins reliever Sergio Romo pitched a scoreless ninth inning in a 4-3 win over the Rangers on Friday. Romo allowed one hit and walked one.

Romo was credited with his 20th save in the win. The veteran reliever now has a 2-1 record, 3.52 ERA, 1.13 WHIP, and 40 strikeouts in 46 innings between the Marlins and Twins this season.

Matthew Terelle26 weeks ago
Sergio Romo picks up four-out save

Minnesota Twins reliever Sergio Romo picked up the save in an 11-9 win over the Royals on Friday. Romo got the final four outs of the game while striking out two to earn his first save as a Twin.

Romo, and not Taylor Rogers, got the call after Sam Dyson gave up three runs in the eighth. It's notable because Rogers has blown six saves this season. Romo could be taking over the closer role sooner rather than later in Minnesota.