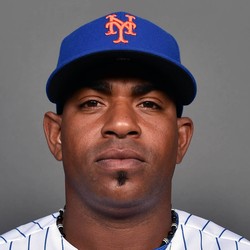 Cespedes and the Mets just restructured his contract after he fell in a hole in his ranch back in May. Instead of earning $29.5 million he will be getting a little less than $10 million in 2020. That makes him a little more attractive on the trade market but it remains unlikely that he gets dealt. The 34-year-old didn't play at all in 2019.

Mets outfielder Yoenis Cespedes underwent surgery today and is expected to miss the rest of the season, according to a report from Joel Sherman of the New York Post. The team did not immediately announce what kind of procedure the outfielder underwent.

Cespedes had already missed nearly the first two months of the season as he recovered from heel injuries, and it was reported earlier this week that he suffered ankle fractures in an accident on his ranch in Florida. The outfielder is under contract for $29,500,000 with the Mets in 2020.

The Mets announced on Monday that outfielder Yoenis Cespedes fractured his ankles during an accident on his ranch in Florida. According to beat writer Tim Healey, he is "in New York to see doctors. The Mets don’t know what this means for him in 2019 and beyond."

Cespedes was already on the injured list and had not played yet this season due to his injured heels, though he had started a running program just a few days ago. We don't yet know the severity of the fractured ankles, but this sounds like an injury that could cost him the rest of the season.

Cespedes remains confident he'll play this season but there's no guarantee he is able to after undergoing dual heel surgeries last year. The 33-year-old is only worth stashing in the deepest of leagues.

Yoenis Cespedes (heel) firmly believes he will return to the Mets sometime in 2019.

The 33-year-old is even set to begin baseball activities next week. It's a nice development but there's still a decent chance Cespedes misses all of 2019. We won't know what his timetable will be like until he begins ramping up his activities, which makes him an easy fade in fantasy drafts this spring.

Brendan Tuma - Too Much Tuma49 weeks ago