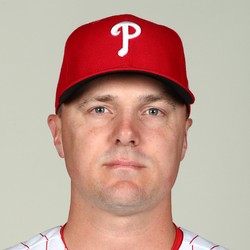 Jay Bruce a candidate to start for Phillies on Opening Day

Phillies outfielder Jay Bruce is a candidate to start in left field for the Phillies on Opening Day, according to manager Joe Girardi.

Bruce hit 26 home runs in just 310 at-bats for the Phillies last season, but those homers came with a .216 batting average. With Andrew McCutchen beginning the year on the Injured List, Bruce appears to be one of Girardi's preferred replacements in the outfield, at least against right-handed pitching.