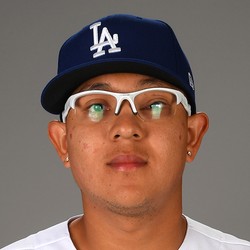 Urias will begin the year in the Dodgers rotation, so the biggest hurdle to him having major fantasy value this year has been cleared.His ability to miss bats is elite and although he's struggled with control a bit in the majors, he has all the tools to succeed. There's plenty of upside, so if you have a solid base for your pitching staff, don't hesitate to pull the trigger a little early.

Julio Urias to begin the year in Dodgers' rotation

Julio Urias will be in the Dodgers' starting rotation to begin the 2020 regular season.

Urias appeared in 37 games last year but made just eight starts, some of which were as an opener. Still just 23 years old, Urias has long been considered an elite pitching prospect. He has a career ERA of 3.18 at the big league level.

Brendan Tuma - Too Much Tuma3 days ago