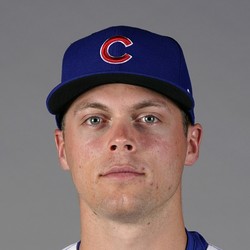 Nico Hoerner to compete for starting second base job

Nico Hoerner will have a chance to win the Cubs' starting second base job this year.

The 22-year-old has been a shortstop throughout his minor league career but is currently blocked at the big league level by some guy named Javier Baez. With Ben Zobrist and Addison Russell out of the picture the Cubs have a hole at second. Hoerner played in 20 games with the Cubs last year, batting .282 with three homers and 17 RBI.