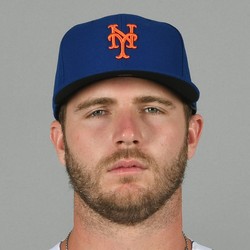 It feels odd that a rookie can hit 53 homers with 120 RBIs then end up draft towards the end of the third round but that's exactly what we have here. 60 homrs is a real possibility but then again, so are 35 homers with a .235 batting average, similar to the disappointment fantasy owners had with Hoskins last season.

The BBWAA announced Monday that Pete Alonso is the 2019 National League Rookie of the Year.

Alonso received 29-of-30 first place votes. Mike Soroka got the other. The 24-year-old Alonso surprisingly broke camp with the Mets to begin the year and instantly hit the ground running. In 161 games he hit .260 with a whopping 53 homers and 120 RBI. The slugging first baseman won't come cheap in fantasy drafts next spring.