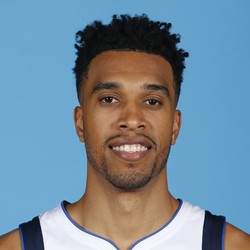 Lee efficiently utilized every minute that he was on the floor. During his 12 minutes, he shot a perfect 4-for-4 from behind the arc which easily carried his point total for the evening. While Lee's effort led to 19.5 fantasy points, he has only played in four games this season.

Garett Thomas9 weeks ago
Courtney Lee gets traded to the Mavericks

With Lee and Hardaway gone, Kevin Knox and Allonzo Trier, both get a solid bump in value despite Matthews joining the Knicks. Looks for Knox to benefit the most while Lee doesn't gain anything out of this deal and could receive a buyout.

Courtney Lee picked up a DNP-CD in Monday's loss to the Hornets.

After a couple of injuries and appearances it seemed like Lee was getting back in the rotation but that's not the case. A change of setting would help his value but for now leave him on the waiver wire.

Courtney Lee scored three points with one rebound in Friday's loss to the Nets.

In five minutes of play, Lee made his only shot from the field and went 1-of-2 from the line. This was the first time Lee has played since December 27. He could see more time with Emmanuel Mudiay out, but it's best to wait and see.

Courtney Lee received a DNP-CD in Tuesday's loss to the Warriors.

Lee hasn't played since December 27. He can be left on the waiver wire.