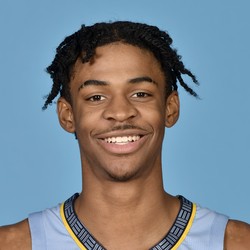 Ja Morant scored 16 points and dished 12 assists on Friday night. He shot 6-of-11 from the field and made all four free throw attempts. He also grabbed two rebounds in the contest.

The Rookie of the Year front-runner recorded his seventh double-double of the season last night. While Jaren Jackson Jr.'s 18 points per game is leading the team in scoring, Morant is right behind him with 17.4 and sets the Grizzlies' pace with 7.1 assists per game, good for 12th in the league. Continuing starting him with confidence as this young Grizzlies' team pushes their argument to be a Western Conference contender.

Ja Morant had a rough night against the Celtics. He scored two points on 1-of-5, missing his lone three-point attempt and failing to get to the free throw line. He had one rebound and five assists over 24 minutes.

Morant's two points were his worst of the season. His one rebound tied for his lowest-mark of the season. It was a bad night, the first we've seen since he was drafted second overall. Morant is a superstar in the making and hopefully the rookie will have have a short memory. He should bounce back Friday night with an easier matchup against the Pistons and reflect his 17.9 point and seven assist average.

Ja Morant scored 16 points on 5-of-14, going 1-of-2 from deep and 5-of-6 on free throws. He grabbed three rebounds, dished nine dimes, and swiped a steal over his 35 minutes.

Morant has been within two assists of a double-double for his last three games. He's been gaining confidence lately and has been absolutely electric on the offensive end of the court, making shots for himself and elevating the play of his teammates. He's averaging 8.8 assists in January, which would be good for fourth in the NBA this season. Morant has officially surpassed Jaren Jackson Jr. as the Grizzlies top scorer and only looks to be improving from here. His value in dynasty leagues is sky-high and he can still be purchased for cheap in DFS. Morant's next matchup will be on the road against the Celtics on Wednesday.

The Grizzlies rookie continues to dish assists on a consistent basis, averaging over eight assists a game over his past ten. He continues to develop and is a must-own asset in all formats as he pushes for rookie of the year.

Ja Morant dropped 26 last night on a hyper-efficient 10-of-11 from the field, going 3-of-4 from deep and sinking all three of his free throws. He added five rebounds, eight assists, a block, and a steal over his 27 minutes on Tuesday night.

Morant led the team in points and minutes as he continues to blossom as a legitimate NBA point guard. He's averaging 20.3 points, 4.4 rebounds, and 8.9 assists for the month of January which is pacing as his best month of his rookie season. If he could keep this pace up, he'd be a top-10 point guard for the remainder of the season. The electric rookie should be on your radar for a trade if you can pry him away from his owner. He'll hope to keep the momentum going when the Grizzlies face the Cavs Friday night.