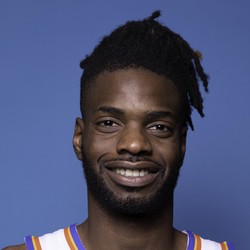 Nerlens Noel scored 15 points last night in 19 minutes of relief, going 6-of-7 from the field and 3-of-4 from the free throw line. He also grabbed five rebounds, had two assists, two blocks, and two steals.

Noel has been hyper-efficient since his return from injury, making 10-of-13 for 25 points over his last two outings and adding 11 rebounds, five blocks, and three steals in 40 total minutes. Realistically, as long as Steven Adams is on the court Noel doesn't bring much to the table for fantasy owners. Still, it's good to see the sixth year center putting up solid efforts recently. Keep him on your waiver wire unless his role with the team suddenly changes.

Noel is averaging 7.7 points, 5.1 rebounds, 1.2 assists, 1.1 steals, and 1.6 blocks per game in 18.5 minutes a game in 35 played. Noel could be a cheap plug and play option tonight against Portland if Steven Adams is ruled out again.

Nerlens Noel will remain sidelined for Wednesday's game against Toronto.

With Noel on the shelf, Mike Muscala has been receiving an increased role off the bench but hasn't provided much upside. Muscala is nothing more than a DFS dart throw.

Nerlens Noel (ankle) will not play Thursday against the Rockets.

Noel will miss his third consecutive game due to a left ankle sprain. Steven Adams will once again be heavily relied on and should see an uptick in minutes with Noel out. Mike Muscala could also see some extra minutes off the bench. Noel next chance to return will be Saturday's tilt against the Lakers.

Nerlens Noel is out for Tuesday's matchup with the Nets due to an ankle injury.

With Noel out of the lineup, Mike Muscala should see some extra minutes off the bench behind Steven Adams.