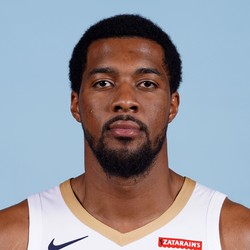 Derrick Favors chipped in nine points (4-6 FG, 1-1 FT), nine rebounds and two blocks in 22 minutes during the Pelicans' 120-107 victory over the Timberwolves on Sunday.

Favors was solid on Sunday and came one point and one rebound shy of a double-double. The 10-year vet has produced nicely and has received an uptick in minutes so far during the month of March. For fantasy purposes, Favors is typically a good source of rebounds but is rather inconsistent on offense. Favors and the Pelicans have won two straight and have two days off before taking on the Kings Wednesday.