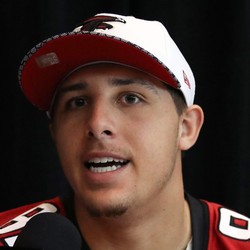 Hooper, the top free agent at his position, is reportedly set to become the highest paid tight end in football. Vaughn McClure of ESPN reports the deal is for four years and $44 million. This move is obviously a win for Baker Mayfield and the Cleveland offense as a whole. However, it definitely hurts David Njoku's value.

Brendan Tuma - Too Much Tuma3 weeks ago
Austin Hooper being pursued by Green Bay, Washington, and Cleveland

Hooper caught a career-high 75 balls for 787 yards and six TDs in just 13 games in 2018. After four years in Atlanta, the former third round pick out of Stanford will look to become one of the highest-paid TEs in NFL history. He’s a lock to be a top-5 TE in 2020.

NFL.com expects Austin Hooper to "reset a tight end market" that needs it given the lack of high-profile non-QB free agents this offseason.

Hooper has registered back-to-back 70-catch seasons and showed that 2018 wasn't a fluke. His value will ultimately be determined by where he signs this offseason, but he's currently the TE6 in our early expert consensus rankings.

Rob Demovsky of ESPN reports the Packers are preparing to "make a run" at free agent tight end Austin Hooper.

Hooper broke out in 2019, catching 75 passes for 787 yards and six touchdowns in 13 games. The 25-year-old would certainly be an upgrade over the corpse of Jimmy Graham next year. Hooper is reportedly also being pursued by the Bears.

The Bears are preparing to pursue free-agent tight end Austin Hooper, but it's unclear if the team can afford him.

Hooper figures to be one of the most popular free agent targets given his success in 2019. The Bears have struggled to field a consistent tight end with the failed Trey Burton signing and Adam Shaheen's injuries. While he would be a good fit for Chicago, it's not clear they will be able to land him given his expected value. Hooper will be a TE1 in 2020. His landing spot will help determine just how high he will go.

Deposit $10 at a DFS partner site you have NOT played at and get a FREE 6 Month HOF Subscription!
Claim Offer
Who Should I Start?
Most Accurate Experts
for Austin Hooper
Consensus Rankings
View All Rankings