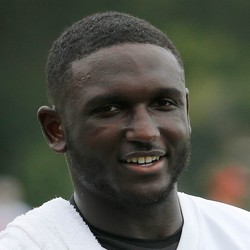 Chris Godwin (hamstring) has been ruled out for Sunday's game against the Falcons.

Godwin hasn't practiced since suffering the hamstring injury in Sunday's Week 15 win over the Lions. He was one of the top breakout candidates in 2019, hauling 86 catches for 1,333 yards and nine touchdowns on 121 targets. Look for waiver wire wonder Breshad Perriman and Justin Watson to lead Tampa Bay's receiving corps in Week 17.

Chris Godwin will not participate in Tampa Bay's Week 16 game against the Texans on Saturday, due to a hamstring injury.

Godwin being out means you need to remove him from your lineup. If you are in the championship, and your league does not extend into Week 17, Godwin can be safely dropped. This development increases the stock of all Tampa Bay wide receivers, tight end O.J. Howard and could also increase the pass-catching role from Peyton Barber and Ronald Jones.

Godwin is not expected to play this week after injuring his hamstring in the third quarter of Week 15's win over the Detroit Lions. Breshad Perriman and Justin Watson are expected to operate as the team's number one and two receivers respectively, but head coach Bruce Arians has acknowledged that he will need to utilize his running backs and tight ends more with a practice squader likely to be manning the third receiver role for Tampa Bay. With the fantasy championships over in Week 16, Godwin will be safe to drop in redraft leagues once he is formally ruled out.

Tampa Bay has yet to rule out Godwin for this Sunday's showdown with the Texans but things don't look good. With Mike Evans also sidelined the Bucs might have to rely on Breshad Perriman as their top wideout in Week 16.

Godwin was forced from the team's Week 15 game against the Lions due to the injury. He was ultimately carted off the field. Nothing official has been said, but it seems likely that -- like teammate Mike Evans -- Godwin is done for the season. That will open opportunities for Breshad Perriman and Justin Watson who should be starting in 2WR sets for the Bucs. This will also negatively impact Jameis Winston.

Deposit $10 at a DFS partner site you have NOT played at and get a FREE 6 Month HOF Subscription!
Claim Offer
Most Accurate Experts
for Chris Godwin
Consensus Rankings
View all Flex Rankings