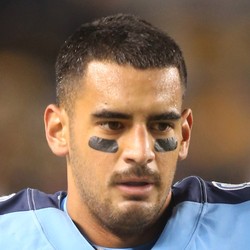 The Raiders have come to terms with free agent Marcus Mariota.

Mariota had a pretty rough 2019 as he was benched for Ryan Tannehill after some erratic play and a 2-4 record. Tannehill securely grabbed the starting job from there and was gifted with a four-year contract. Raiders' general manager Mike Mayock was very outspoken in his praise for Mariota as he was coming out of Oregon in 2015 so it's no shock that the Raiders are willing to take a shot with him now. Derek Carr has been rumored to be on the trade block, and if he is to move Mariota would assume the starting role and be a QB2. Assuming Carr stays, he will likely be the starter to begin the regular season, but with Mariota looking over his shoulder.

The Raiders are pushing to close out a deal with quarterback Marcus Mariota, per Mike Garafolo of the NFL Network.

After erratic quarterback play last season, Mariota was benched mid-way for Ryan Tannehill. He passed for 1,203 yards with seven touchdowns and two interceptions across six starts with the Titans in 2019. Mariota struggled with a (2-4) record and was sacked 25 times during that span. The Raiders are looking to sign the former second overall pick to backup Derek Carr and are looking to close out a deal soon. Oakland could save $13 million by cutting Carr.

Marcus Mariota was benched for Ryan Tannehill in Sunday's game against Denver in the third quarter.

Mariota had only completed 7-of-18 passes for 63 yards and two interceptions in the third quarter before HC Mike Vrabel decided to put in Tannehill and give his team a chance to stay in the game. After also struggling against Buffalo last week, it would not be a shock to see Mariota on the sidelines for the Titans' Week 6 game against the Chargers.

Marcus Mariota was 13-for-22 for 183 passing yards while rushing for 13 yards on the ground as the Titans lost to the Bills by a 14-7 score on Sunday.

The Bills were able to contain Mariota and the Titan offense and sacked the veteran quarterback five times on Sunday. Mariota will look to rebound in Week 6 but will have a tough time against the Broncos in Denver and should not be started in anything but deeper fantasy formats.

Marcus Mariota completed 18 of 27 pass attempts for 227 yards and three touchdowns in Week 4 against Atlanta. He also added three rushes for 22 yards.

Mariota had his best game of the season as his receivers made some big catches and turned them into big plays. The 25-year-old QB will have a struggle in Week 5 when he faces a tough Bills defense that just shut down Tom Brady.

Deposit $10 at a DFS partner site you have NOT played at and get a FREE 6 Month HOF Subscription!
Claim Offer
Most Accurate Experts
for Marcus Mariota
Consensus Rankings
View All Rankings