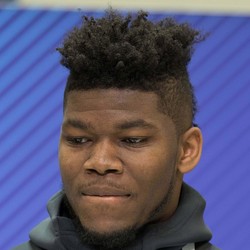 Carroll added that there were "other things" to clear out during surgery. Penny is expected to make it back but it'll be a lengthy recovery. Chris Carson, who is dealing with a hip injury but doesn't need surgery, will enter 2020 as Seattle's top RB.

Seahawks running back Rashaad Penny is out for the remainder of the season after an MRI today revealed a torn ACL, according to a report from NFL insider Ian Rapoport.

It was originally hoped that Penny merely had a sprain, but today's MRI showed otherwise. He had scored three touchdowns in his last two games heading into last Sunday but is now expected to be out until training camp. Chris Carson will continue to be the lead back in Seattle, while C.J. Prosise could see an increased role with Penny out.

Ian Rapoport of NFL Network reports Rashaad Penny suffered a sprained ACL in Week 14 and that his season is likely over.

Penny suffered the injury on Seattle's opening drive last night. He will undergo more tests today but it appears that Chris Carson will be an every-down RB the rest of the way. We should have another Penny update later today.

Rashaad Penny rushed 15 times for 74 yards and a touchdown in the Seahawks' 37-30 Week 13 win over the Vikings, adding four catches for 33 yards and another score.

It was a monster performance from Penny, who was a lot more involved following Chris Carson's Week 12 fumble. However, Carson still saw 23 carries himself as Seattle was able to run the ball a lot in this one. Carson is still the lead dog here, but Penny will be a low-end RB2/FLEX play entering the fantasy playoffs.

Rashaad Penny rushed 14 times for 129 yards and a touchdown as the Seahawks beat the Eagles 17-9 in Week 12.

The highlight was a 58-yard touchdown. Penny then saw some extended run once Chris Carson lost yet another fumble. Penny actually out carried Carson 14-8. He'll be a priority add off waivers this week.

Deposit $10 at a DFS partner site you have NOT played at and get a FREE 6 Month HOF Subscription!
Claim Offer
Most Accurate Experts
for Rashaad Penny
Consensus Rankings
View All Rankings