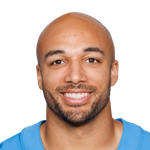 In eight full games with Justin Herbert under center last year, Ekeler saw 63 targets. Over a full 16-game season, that amounts to 126 targets. While I don't expect him to get there, he's one of just two running backs (Christian McCaffrey is the other) who I'm projecting for 100-plus targets in 2021. Targets are worth twice as much as carries, so even if Ekeler winds up getting just 12 carries per game, it's not the end of the world. In fact, he can still finish as a borderline RB1 if he were to hit just 200 carries on the season. The new coaching staff obviously brings on some potential volatility, but there's not much other talent on the roster at running back, so his role should be very safe.