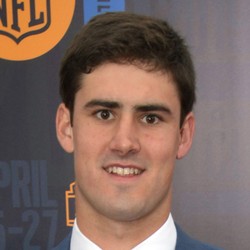 Jones is going to be very relevant in 2020 with the supporting cast that he has around him. His ability to pick up yards on the ground certainly helps his floor and he should be fantasy relevant more often than he's not this season.

I have no idea what to make of Daniel Jones. He was pretty solid in his debut season, with five clean games against mediocre defences where he scored big time fantasy points. On the other hand, he had eight games where his TD count was as bad as, or worse than, his intercept count. That's a scary sign. To make matters worse, Joe Judge has popped up with an offence focussed on running the ball. Now the team which was third in the passing volume charts could fall into the mid-field. This is a scary pick, but if you're grabbing him as one of two late QBs, he's a worthwhile gamble.

Ben Wasley - The Fantasy First Down6 weeks ago

Here's a fun fact: Jones had two top-10 single performances by a quarterback in 2019. The only other quarterbacks who can say that are Lamar Jackson and Russell Wilson. He hit the "boom" mark in 30.8 percent of his starts in 2019, the third-highest mark in the league. Keep in mind that he did that while not having a single game with Barkley, Engram, Shepard, Tate, and Slayton all healthy. He needs to become more consistent, but he does present tons of upside.

Dallas Cowboys QB Dak Prescott was 6th, 10th, 11th, and 2nd in fantasy points by quarterbacks under Jason Garrett, even though he was fired by the Dallas Cowboys as their head coach, Daniel Jones should thrive in the new Giant's offensive coordinator's offense.

Turnovers were a big problem as a rookie, but showed some real dynasty promise.

Lukas Kacer - The Fantasy Stock Exchange14 weeks ago
Who Should I Draft?
Most Accurate Experts
for Daniel Jones
Do Not Sell
Are you looking to contact Customer Support about a subscription or account related question?
Yes
No, I'm a California resident looking for the California Consumer Privacy Act form