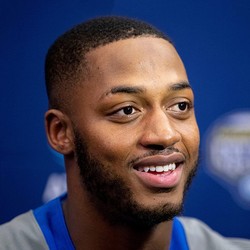 Gibson only saw 77 total touches in college due to playing behind guys like Tony Pollard and Darrell Henderson at Memphis. However, he made every touch count with his explosiveness and top-end speed. Gibson's electric with the ball in his hands and was used all over the formation in college, which I expect for that to continue in Washington. This coaching staff clearly has a plan for him with where they selected him in the Draft and I expect Gibson's ADP to rise significantly in the next few weeks as we start to hear more about how he'll be utilized in the offense.

Antonio Gibson: Redskins will need to get the ball to him 'creatively'

Redskins offensive coordinator Scott Turner says he will need to creatively get the ball to Antonio Gibson and J.D. McKissic.

"You want to be as unpredictable as possible," Turner elaborated. "Guys that are able to do more things give you more options." Gibson is the slightly more interesting name here for fantasy purposes, though Washington has far too many running backs it seems. Gibson mainly played wideout in college but the Redskins seem intent on using him as a running back.