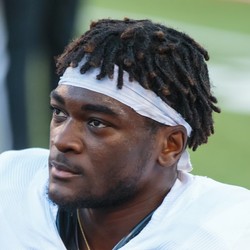 Brandon Aiyuk was one of my most confusing evaluations throughout the pre-draft process and my grade reflects that. He has the draft capital, but Aiyuk's best utilized as a deep-passing option and that doesn't exactly fit Garropolo's skillset. Aiyuk may be one of the players that's better for a NFL offense than for fantasy football.

The Arizona State standout wide receiver became the 25th overall pick of the San Francisco 49ers in the 2020 NFL Draft. With Deebo Samuel going down with a foot injury just a week ago, Aiyuk will have an incredible opportunity early on to play a significant role in the 49ers offense. San Francisco has now officially signed both of their first-round picks (Javon Kinlaw and Aiyuk) to their respective four-year rookie contracts.