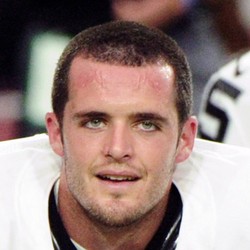 Carr isn't necessarily worth drafting this season in 1QB leagues, but he's someone to keep an eye on on your waiver wire in case there's immediate chemistry with his new receiving weapons.

Derek Carr is expected to open the season as the starter in Las Vegas with newly signed Marcus Mariota as the backup. The Raiders have two first-round picks in next week's draft but the team is expected to address another needs. Mayock also told reporters the team needs to get better at the wide receiver position.

(2020)
View Full Schedule
Who Should I Draft?
Most Accurate Experts
for Derek Carr
Do Not Sell
Are you looking to contact Customer Support about a subscription or account related question?
Yes
No, I'm a California resident looking for the California Consumer Privacy Act form