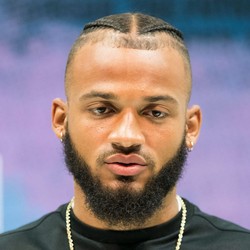 Gabriel Davis played a field-stretching role in college at UCF, but that's unlikely how he'll be used in the NFL. While Davis ran okay at the Combine, he projects best as a possession-style receiver at the NFL level. He'll need to improve his strength at the catch point, but there were some flashes on tape that led me to see a bit of a Michael Thomas-lite type of player. He'll take some developing to get to that point though, which he'll be able to do without the need to play right away in this Buffalo WR corps.

Davis was selected by the Bills in the fourth round and will most likely be fourth on the chart behind Stefon Diggs, John Brown and Cole Beasley. He is 6-foot-2 and 216 pounds, but doesn't possess elite speed. Davis hauled in 72 of 133 targets for 1,241 yards and 12 touchdowns for Central Florida. The 21-year-old wideout is only worth selecting in dynasty formats.