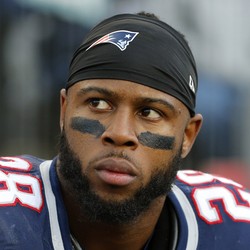 White is a low-upside RB2 in PPR leagues, but we'd advise avoiding him in other formats.

James White rushed once for 14 yards and caught all five of his targets for 62 yards in the Patriots' Wild Card loss to the Titans. White was credited with a fumble on a desperation lateral play on the final play of the game, a kick return.

White was solid in this game, acting as the security blanket as usual. He has PPR appeal if Tom Brady returns, but with a different quarterback and a different looking offense in 2020 being a distinct possibility, White's value is very much up in the air. White is signed through next season with the Patriots.

Deposit $10 at a DFS partner site you have NOT played at and get a FREE 6 Month HOF Subscription!
Claim Offer
Who Should I Start?
Most Accurate Experts
for James White
Consensus Rankings
View All Rankings