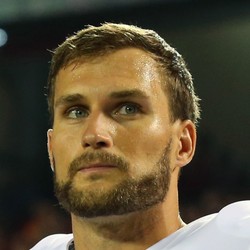 A run-first offense that just lost their best receiver? Cousins is likely to finish higher than where I have him ranked because he's been durable and has zero chance of losing the starting job, but I'd rather select someone with more upside in that range. The best-case scenario for Cousins is that he finishes as a high-end QB2, which is a reach considering he threw the ball just 444 times last year.

Minnesota QB Kirk Cousins said through the team’s website that there are improvements the entire team could make, but one personally for him would be to “take off and run” when the opportunity presents itself.

Cousins has the athletic ability to make plays with his legs, as showcased in his three years as the starter in Washington, where he racked up 14 TDs on the ground. In his two years as the starter in Minnesota, Cousins only has two rushing TDs. The attempts are similar and more easy to predict, but it’s possible the Vikings didn’t give Cousins the free-will to make a play with his legs down in the red zone. This could be a product of the superior run game Minnesota boasts with Dalvin Cook, but either way, Cousins stated that “I’d like to add that (running) to my game and try to work on that the best I can, as hard as it is.” He’s currently ranked #19 in the FantasyPros consensus QB rankings, making him a solid QB2, but if he can add four to five rushing TDs to his stat line, he could potentially hit low-end QB1 production.

Deposit $10 at a DFS partner site you have NOT played at and get a FREE 6 Month HOF Subscription!
Claim Offer
Who Should I Draft?
Most Accurate Experts
for Kirk Cousins
Consensus Rankings
View All Rankings
Do Not Sell
Are you looking to contact Customer Support about a subscription or account related question?
Yes
No, I'm a California resident looking for the California Consumer Privacy Act form