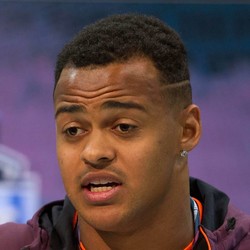 Fant is a high-upside TE2 against a weak Raiders pass defense in Week 17.

Noah Fant records one catch in win over Oakland

Noah Fant had one reception for four yards on two targets in the Broncos' 16-15 win over the Raiders Sunday.

It was another terrible game for Denver's promising rookie tight end. Despite his struggles at the end of the season, he flashed enough to merit low-end TE1 status heading into next season.