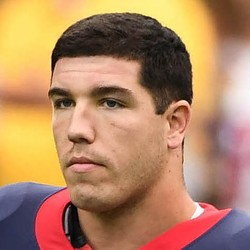 Buccaneers QB Ryan Griffin completed 26-of-43 passes for 330 yards and a touchdown in Friday's preseason loss to the Steelers.

Griffin had a big game and is competing with Blaine Gabbert for the Buccaneers QB2 spot behind Jameis Winston. Despite his impressive performance, Gabbert remains the favorite for the backup role.