In Defense of a Pitcher-Heavy Draft Strategy (2020 Fantasy Baseball)

Jacob deGrom could offer more value over replacement-level options than a star hitter.

There is no real “right way” to draft. A fantasy draft is a living, breathing thing. The outlook for your team changes with every player taken. Your strategy is based on all kinds of variables, some of which are constantly changing. For me, or anyone else, to sit here and tell you that the correct way to draft is [fill in the blank] would just be an ignorant, irresponsible thing to do.

Now that that paragraph is out of the way, allow me to tell you the correct way to draft.

Have a look at these two graphs, displaying the average team ERA and OPS over the last ten 10 of Major League Baseball: 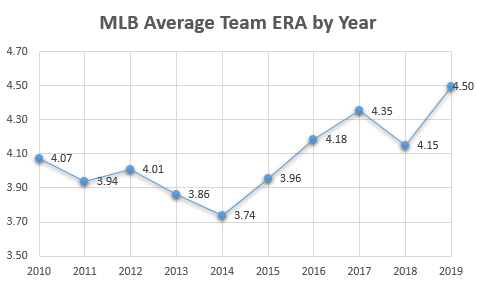 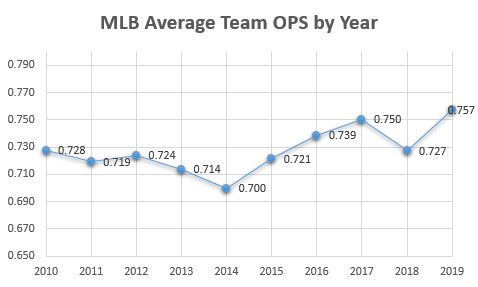 There is a pretty stark trend of hitting taking over the game during the last five years. Last season, we saw 6,776 home runs hit, which shattered the previous record (set in 2017) by 671. You are probably well aware of these facts, but the next step is to figure out what that could mean for our draft strategies. Here are some more fantasy-relevant tidbits to consider:

I could go on, but it is clear that in 2019, dominant pitchers were much harder to find than dominant hitters. Five years ago, a hitter projected for 35 homers was a first-round consideration for that reason alone. This year, you’ll find 30+ homer projections in the 10th round and beyond. This is not to say that the league will stay this way in 2020 and beyond. However, the best guess is that 2020 will be more like 2019 than 2015, which means we should make high-quality starting pitching a priority in our drafts.

I now present you with two mystery third basemen and their 2020 Steamer projections:

Here are the projections for two pitchers currently separated by about 90 picks in ADP:

You’re gaining a half of run in ERA and substantial boosts in every other category. I would argue the gap between Arenado and Donaldson is much, much smaller than the gap between Buehler and Wheeler.

Replaceability is the crux of my argument here. After the super elite all-category hitters (Mike Trout, Ronald Acuna Jr., Christian Yelich, Mookie Betts, and Cody Bellinger) are gone, there isn’t a ton of difference in the guys you’re looking at. A second-round hitter starts looking a lot like a sixth-round hitter, just with less risk involved. For pitchers, there is a steep decline after the first few tiers. If you go hitter-heavy early on and wind up without an ace-level pitcher or two, chances are a few of those teams that did go pitching-heavy will find a way to catch up to you in hitting, and they will decimate you on the pitching side.

Another point I would like to make is the difference in categorical diversity between hitters and pitchers. Throughout the year, you will be able to find hitters on the waiver wire who can help in a needed category or two (guys that are hitting homers with a low batting average or vice versa, or guys that are stealing a bunch of bases unexpectedly). There will be available players who will help your team where you are hurting offensively. With starting pitching, you do not find category specialists (besides maybe K/9 if you play in a league like that) on the waiver wire. Mostly, a pitcher is either good in all categories or bad in all of them. That makes it easier to fix a broken offense than a broken pitching staff. This becomes especially true when teams that do have strong pitching want to hold onto it — as opposed to seeking trades — because they’ve seen what is out there in terms of replacements.

So what am I actually recommending here? I’m not saying to take Gerrit Cole over Trout, Acuna, Yelich, or Betts, Those four are so good in every category that it is hard for any pitcher to replicate that value. However, after those stars are gone, I am likely to start my team by taking Cole or Jacob deGrom. If I have a late draft pick, I am certainly taking at least one starter (if not two) with my first two picks. I typically want at least three of the top-20 starters, and I want my staff pretty much completed by the 12th round or so.

I will end this post by telling you that every league is different. I am not claiming that this is the hands-down correct way to draft, but it is a strategy I believe in for this year, and I hope I have presented the case clearly. Good luck to all!