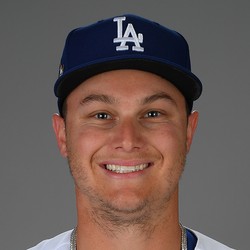 Joc Pederson will remain on the Los Angeles Dodgers despite the Dodgers-Red Sox deal involving Mookie Betts being authorized.

It is not entirely clear why the transaction involving sending Pederson to the Angels fell through, but it is likely that the deal was dependent on the original three-team swap. Pederson's fantasy outlook becomes a bit more cloudy now, with the addition of Betts and the extension of Max Muncy.

Jeff Passan of ESPN reports the Dodgers have traded outfielder Joc Pederson to the Angels.

The Dodgers no longer had a need for Pederson with Mookie Betts now on the roster. In return they received infielder Luis Rengifo. The Angels will likely still use Pederson exclusively against right-handed pitching.

Joc Pederson went 1-for-4 with a solo homer, a walk, and two runs scored as the Dodgers beat the Padres on Tuesday.

The homer was Pederson's 33rd of the year. He'll once again enter 2020 as a useful fantasy option whenever he's facing right-handed pitching.

Joc Pederson (abdomen) isn’t in the starting lineup for Tuesday’s game against the Rockies.

Pederson exited Monday’s game early after hitting the outfield wall hard while making a leaping catch. He will be held out of Tuesday’s contest. Enrique Hernandez will start in right field and replace Pederson in the lineup.

Joc Pederson hit a pinch-hit homer in the 11th inning of Sunday's win over the D'Backs.

The homer was a solo shot. It was Pederson's 28th of the season. The 27-year-old remains worth starting whenever the Dodgers are facing right-handed pitching.