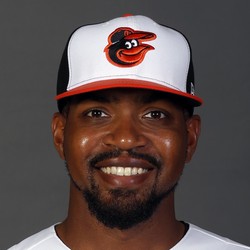 Mychal Givens is in a competition for the closer job with Hunter Harvey, per pitching coach Doug Brocail. Richard Bleier is in the mix to get saves against lefties.

Givens is a dart throw in drafts at this point, given the competition with Harvey and the low likelihood of save chances. It can be hard to blame Givens for giving up more homers than usual last year, but last year's 33.1% strikeout rate is bound to come down.

Mychal Givens trailed starter Tom Eshelman in Wednesday's exhibition against the Blue Jays, serving up a two-run homer to Randal Grichuk. He also walked one and struck out one in the outing.

Givens continues his rough spring, now sporting a 10.38 ERA. Manager Brandon Hyde believes that there is competition for the closer's job, and Givens is not helping matters. For what it is worth, Hunter Harvey also had a poor outing Wednesday, giving up a two-run homer as well. Continue to monitor this fluid situation, but it would be wise to look for saves elsewhere.

Mychal Givens pitched the fourth inning of Sunday's exhibition against the Yankees, giving up two runs on two hits. He left a pitch middle-middle to Thomas Milone, who promptly deposited the ball over the fence.

This was just Givens's second appearance this spring, but he hasn't looked sharp. Hunter Harvey is chasing him down to be the closer. At this point, it's worth chasing Harvey or looking somewhere else if you need saves late in drafts.

Mychal Givens's shot at the closer role is in doubt after it has been reported that Hunter Harvey will get a look as the Orioles' closer.

Givens had a rough 2019, posting a 4.57 ERA with a 10% walk rate. Givens has been dealing with an illness this spring and has yet to pitch in a game. This situation is worth monitoring leading up to your draft, as the winner of the closer job in Baltimore will come cheap and potentially present a bargain on draft day.

Mychal Givens pitched one inning on Saturday giving up three runs on two hits and walked one batter as the Orioles lost to the Mariners in extra innings.

Givens was one of the few players on the Orioles getting drafted by fantasy owners before the season as the reliever looked like he would have a big year as the teams closer. But that was not the case as Givens has struggled and has a 4.77 ERA and has converted 11 of 19 save opportunities.

John Aubin42 weeks ago
Who Should I Draft?
Do Not Sell
Are you looking to contact Customer Support about a subscription or account related question?
Yes
No, I'm a California resident looking for the California Consumer Privacy Act form