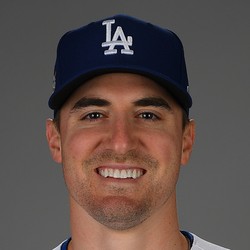 Ross Stripling will remain with the Dodgers despite the Mookie Betts trade being authorized.

In the originally agreed-upon deal earlier this week, Stripling and Joc Pederson were to be dealt to the Angels in a separate transaction. That deal has now been retracted, perhaps because it relied on the original three-team deal involving the Twins. Stripling and Pederson will return to a team that nearly traded them and, as in previous years, Stripling's role in the Dodgers' pitching staff is murky.

Ken Rosenthal of The Athletic confirms Ross Stripling is also headed to the Angels as part of the Joc Pederson trade.

It was reported last night that Pederson was on his way to the Angels. Bob Nightengale of USA Today was the first to mention today that Stripling was also part of the deal. This is a big win for Stripling’s fantasy value since the Dodgers were always looking to cap his innings despite his success as a starter. Similar to the increase in fantasy value that Kenta Maeda will receive with the Twins, fantasy players should also be more excited about Stripling moving forward.

Brendan Tuma - Too Much Tuma2 weeks ago
Ross Stripling gives up three runs, strikes out seven

Ross Stripling started and went three innings on Wednesday versus the Padres, giving up three runs on four hits while striking out seven.

Stripling hasn't pitched more than three innings in an appearance since the middle of the summer. He's expected to be used out of the bullpen for the Dodgers' playoff run.

Ross Stripling pitched three innings in Wednesday's start in Baltimore, allowing one run on three hits while striking out two.

Stripling missed all of August with a neck injury and doesn't have the arm strength to pitch deep into games right now. He'll primarily be used a reliever for the playoffs and doesn't offer any fantasy value for the rest of 2019.

Stripling isn't stretched out enough to be used as a traditional starter right now, but it was still nice to see him pitch well. This was his first appearance since July 24th and he now owns a 3.50 ERA through 79 2/3 innings this year. It'll be worth monitoring how the Dodgers plan to use Stripling moving forward.