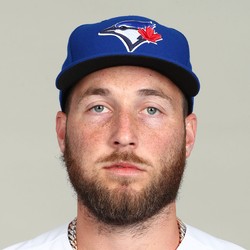 Sean Reid-Foley gave up five runs on five hits with two walks and two strikeouts over 1 2/3 innings in a loss to the Dodgers on Tuesday.

Sean Reid-Foley gave up three runs on four hits while walking three and striking out three in just 3 1/3 innings Wednesday in a loss to Texas.

Reid-Foley is now 2-3 on the season and saw his ERA rise from 2.36 to 3.00 after Wednesday's loss. The 23-year-old righty still has some deeper league appeal and is worth owning in AL-only formats.

Sean Reid-Foley allowed four runs (one earned) on four hits while walking four and striking out two batters over four innings in Sunday's loss to the Orioles.

Sean Reid-Foley got the win against the Royals on Tuesday, giving up no runs on four hits over five innings, striking out four and walking four as the Blue Jays won 9-2.

Reid-Foley was fortunate to stay out of trouble with his four walks. On the season with the Jays, the 25-year-old has a 1-1 record and 2.55 ERA over three starts. Reid-Foley may have a spot in the rotation for the foreseeable future but for now, is not worth owning in fantasy.

Sean Reid-Foley gave up two runs on five hits and one walk while striking out three in 5 1/3 innings Friday against the Royals. He did not factor into the decision.

This was the best outing so far for Reid-Foley as he has struggled in his brief stints in the major leagues. Over 10 appearances in the majors, the 23-year-old has a 5.06 ERA and 1.62 WHIP. Reid-Foley looks to get another start on Wednesday against the Red Sox but fantasy owners should avoid that matchup.

John Aubin1 year ago
Who Should I Draft?
Do Not Sell
Are you looking to contact Customer Support about a subscription or account related question?
Yes
No, I'm a California resident looking for the California Consumer Privacy Act form