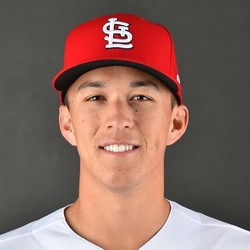 The Cardinals are planning on using Tommy Edman as a super-utility player to begin the 2020 season.

We still expect Edman to play most every day, primarily in the outfield. However, he is also plenty capable of filling in at second base and third base if an opportunity arises. The 24-year-old hit 11 homers and stole 15 bases in just 92 games last season.

Tommy Edman went 2-for-4 with a triple and three RBI in Saturday's loss to the Cubs.

Edman has been a sparkplug since joining the Cardinals, and demonstrated his abilities on Saturday, delivering an RBI triple and an RBI single. The Stanford product is batting .307 with 11 homers and 36 RBI in 91 games played.

Tommy Edman went 2-for-3 with a solo home run, three runs scored, and a walk in Monday's win over the Diamondbacks.

Tommy Edman went 2-for-3 with a solo home run, and an additional RBI in Wednesday's win over the Nationals.

Edman has found his power stroke lately, blasting four homers in September and reaching 10 on the season. He's quietly been putting together a solid rookie campaign, batting .286 with 48 runs scored in 82 games played.

Tommy Edman went 1-for-4 with a two-run home run in Sunday's loss to the Brewers.

Edman's homer in the ninth brought the Cardinals within one run, but the offense could not push another run across. Edman is batting .282, and has now homered in consecutive games.