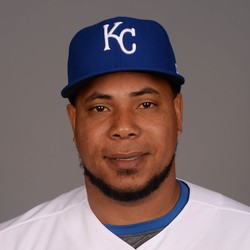 Kansas City Royals reliever Wily Peralta had a bitter-sweet outing in his team's 4-3 win over the White Sox in 10 innings on Wednesday. Peralta blew the save but wound up earning a win.

Peralta allowed two hits and walked one in his two innings pitched. The Kansas City closer situation is a mess right now with no one in the bullpen pitching particularly well. Peralta has a 2-1 record, 6.00 ERA, and two blown saves on the season.

Matthew Terelle51 weeks ago
Wily Peralta picks up a save

Kansas City Royals Wily Peralta pitched a perfect ninth on Saturday to preserve a 3-0 win over the Indians.

That goes down as Peralta's first save of the season. The closer role in Kansas City has been a disaster with Brad Boxberger and Ian Kennedy both struggling for much of the season. Peralta has a 9.00 ERA and hasn't been great either, but it is possible he starts to see the majority of the save chances if he goes on a run. He's worth picking up if you are in need of saves.

Wily Peralta came in during a tied game in the ninth inning Wednesday. He ultimately took the loss, allowing a run on a hit and a walk.

Peralta is off to a rough start to the season with three earned runs in just under three innings pitched. There was thought that he could be in the mix for saves in KC, which would be the only reason to consider him for fantasy purposes, but the Royals have used several arms in a closer-like role to open the year. Given that, and the fact that KC isn't expected to compete this year, Peralta isn't worth owning at this point.

Wily Peralta picked up a save against the Reds on Tuesday. He allowed two hits and a walk, but kept Cincinnati off the scoreboard to secure the victory.

Peralta is pitching to a 3.90 ERA this season and has six saves in September. Keep him locked in lineups in case the Royals can continue to string wins together.

Wily Peralta racked up his fifth save of September on Sunday against the Tigers. He allowed a run on two hits and a walk, but also struck out a batter to secure the win for the Royals.

Barring trade or injury, it wouldn't be surprising to see the rebuilding Royals give Peralta first crack at the closer's role next year. He's not going to put up elite ratios, but he also hasn't blown a save all season.