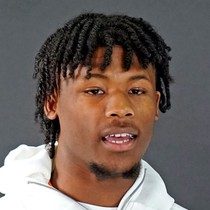 Tee Higgins declares for the draft

The junior Clemson Tigers wide receiver has declared his intentions to enter the NFL Draft in April. In his last two seasons of collegiate football Higgins caught 59 passes in each season, scoring a total of 26 touchdowns while accumulating 2,103 receiving yards. (Source: Tee Higgins on Twitter)

Fantasy Impact: Considered by many to be one of the top-five receivers in this years class one can expect Tee Higgins to be selected in the first two rounds of the draft. Higgins is often compared to an A.J. Green type wide receiver because of his tall, lengthy body and his prowess in the red-zone.

Deposit $10 at a DFS partner site you have NOT played at and get a FREE 6 Month HOF Subscription!
Claim Offer
Player News
View All News
Consensus Rankings
View all Flex Rankings
Latest Products Updates