Bauer has been one of the few aces to deliver in the early going.

In an April where the majority of expected aces underwhelmed, Trevor Bauer stood out as a saving grace. Even he, however, has regressed from 2018’s breakout.

Despite his 2.45 ERA, there are plenty of warning signs to heed before locking in the 28-year-old as a top-five fantasy starting pitcher. His K-BB% has dropped six full points to 16.9, and his FIP has springboarded from 2.44 to 3.53.

Having already issued six walks twice in seven turns, his control is the largest concern. Following an encouraging uptick in first-pitch strikes (63.7%) in 2018, the rate has dropped closer to career norms at a subpar 58.2%. He’s not fooling hitters nearly as much. Opponents have chased 26.1% of pitches off the plate, down noticeably from last season’s 31.4.

While his .261 wOBA is superb, Statcast’s .324 expected wOBA pits him behind Trevor Williams, Lance Lynn, Jhoulys Chacin, and Marco Estrada.

This isn’t meant to sound the panic bells. A 3.50 ERA paired with an elite strikeout rate would still make Bauer a front-line hurler in this bleak landscape. With so many other starters floundering, few managers are likely in a position to move the Cleveland righty. Besides, someone attempting to sell high should wait after another strong outing, as buyers might not be as excited as they were before he ceded four runs to the Marlins on Tuesday.

The anchoring effect may still lead to a major haul. After he allowed one hit and run apiece in 2019’s first two turns, some onlookers were ready to anoint Bauer the new No. 1 starter. With a lower K-BB% and higher FIP than Pablo Lopez and Max Fried, that’s definitely not the case. See if any disgruntled owners of Chris Sale, Noah Syndergaard, Aaron Nola, or Carlos Carrasco would add something extra to exchange a struggling ace. Or if interested in a one-for-one ace swap, offer up Bauer for his old pal, Gerrit Cole. With a spectacular 37.6% K rate, Houston’s righty is still a top-line stud despite a 2-4 record and 3.95 ERA that’s a full run higher than his FIP. It appears some would make that one-for-one challenge deal.

Javier Baez: 69.8% Contact Rate … and .314 Batting Average
For better or worse, Baez has been nearly the same player as from last year’s breakout. He continues to excel (.314/.352/.653) despite an ultra-aggressive approach, forcing skeptics like myself to wonder if he’s an outlier rather than a bust candidate.

Baez’s contact rate has only increased slightly from 2018’s 68.5%, which somehow steered him to a .290 batting average. Surely a free-swinger with a 4.5% walk and 25.9% strikeout rate couldn’t keep that up without refining his plate approach, right? Maybe he can. The 26-year-old has also chased an MLB-high 45.5% of pitches seen outside the strike zone, nearly identical to marks posted over the last two seasons. In April, however, he also made louder contact.

Last season, Statcast’s .279 expected average and .509 expected slugging validated regression fears. That’s not the case this season; a .306 xBA and .583 xSLG instead embolden his superstar ascent. Those gaudier marks stem from a 3.7-mph rise in average exit velocity and a 3.4-degree uptick in launch angle. Although he’s hitting all pitches harder, Baez has crushed breaking balls to a .493 wOBA while replicating last year’s .574 slugging against fastballs. 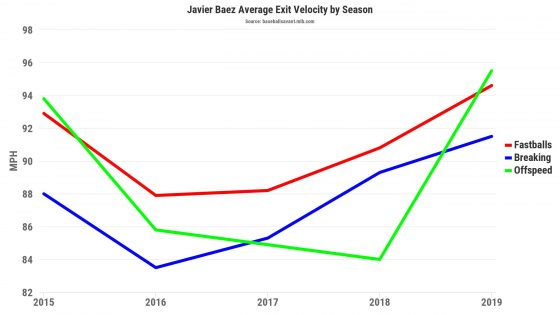 At the very least, this start should dispel beliefs of the Cubs infielder cratering all the way back to pre-2018 levels. His audacious approach could still lead to some slumps that bring his rest-of-season average into the .270-.280 range, as projected by Steamer, ZIPS, and THE BAT. However, the reasonable floor isn’t significantly lower, and his elite power looks here to stay. As long as he runs enough to at least steal 12-15 bases, drafters won’t regret investing a second-round pick on the one-of-a-kind player.

Ryan Pressly: 32 Straight Scoreless Outings
Pressly has not relinquished a run in 30.2 scoreless regular-season frames since August 10. If including last postseason, where he allowed — gasps — one opponent to score, his ERA with the Astros jumps all the way up to 0.66 with 52 strikeouts in 40.2 innings.

The 30-year-old has also not issued a walk this season, leading him to an absurdly low 0.41 WHIP. Of course, regression is forthcoming. After all, his FIP is exactly a full run higher than his ERA! Oh yeah, his ERA is 0.00, so that’s still really good.

A 9.49 K/9 doesn’t look so dominant, but a 31.0% strikeout rate puts his results into better context. And when opponents have made contact, they have mustered 19 grounders on 29 batted balls. None of those balls in play have registered an exit velocity of 95 mph or higher, and he has yielded a -4.4-degree average launch angle.

Among pitchers with at least 40 plate appearances, Pressly has posted the second-lowest opposing wOBA (.114). Unfortunately for fantasy managers hoping this awesomeness will translate to save opportunities, Astros closer Roberto Osuna leads the way at an exceptional .068. We’d be talking about Pressly alongside Josh Hader and Edwin Diaz as a premier reliever if closing. Even without the opportunity, he’s still a must-own stud who will help investors in strikeouts and ratios — while picking up the occasional save and win — much more than any pedestrian closer in a committee.

Less than two months ago, the Rangers signed Leclerc to a four-year extension that endorsed the 25-year-old as their current and future closer. Less than two weeks ago, manager Chris Woodward said they will stick with the struggling righty in save situations. After blowing a three-run lead on Thursday night, Leclerc is out as closer for the time being. For all of the damage he has already inflicted, nobody should hesitate to move on in standard mixed leagues.

Andrew Gould is a featured writer at FantasyPros. For more from Andrew, check out his archive and follow him @andrewgould4.