Strikeout to Walk Rate infers much about Mike Soroka

There are seemingly a million different metrics to explore when looking at baseball data. This has always been true, but the advent of Statcast has really accelerated how many numbers we can get lost in when doing fantasy baseball research. Most of the time, having more and more information is a good thing – the prospect of successful projection really increases as we get more and more information to learn from. However, sometimes we can get lost in the “noise” of data and fail to give basic, logical statistics to their fair weight. I think this may be happening with pitching. There is one statistic I look to first when I am evaluating a pitcher, and that number does a nice job setting a general expectation for me.

That stat is strikeout to walk ratio. Strikeouts divided by walks. There are a lot of things in a baseball game that the pitcher cannot control (basically everything that happens after a ball is put in play). Two things a pitcher has complete control over are strikeouts and walks. These two statistics tell us a lot. A pitcher that does not walk a lot of batters clearly throws a lot of strikes, so if you can find one of those pitchers that also strikes out batters at a high rate, it is fair to assume that the pitcher throws hard to hit, effective pitches. Not walking batters also makes it much easier to get deeper into the game, which is becoming more and more important in fantasy with the ever-increasing focus on pitch counts and diverse bullpen usage. If you play in a quality start league, you know how hard it can be to find a guy that can actually throw six innings every time out. Strikeout to walk ratio helps us find those pitchers. 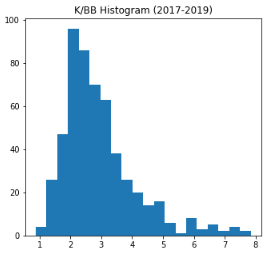 You see a pretty wide spread there, with the highest K/BB ratios approaching eight. The vast majority of the ratios are between one and five, showing how valuable the highest achieving pitchers can be.

Now we will take a look at how K/BB ratio affects the actual statistics you are looking to compile in fantasy baseball. I am assuming almost all category leagues still use ERA (Earned Run Average), and a lot use WHIP (Walks Plus Hits Per Innings Pitched. I looked at the relationship between K/BB and these two statistics with a scatter plot. Here are those visualizations. 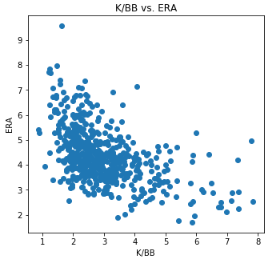 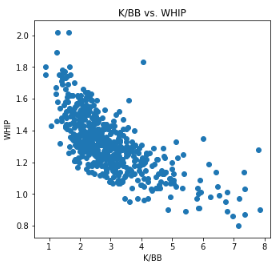 Perfect linear relationships are pretty much a myth in real life, but these two graphs show clear relationships. As K/BB goes up, ERA and WHIP generally come down. You will notice that there are no dots in the top right quadrant of those plots. If you have a K/BB above five, you can feel very confident that you will also see that pitcher have an ERA under four and a WHIP under 1.3. The best 20 or so WHIP ratios came with a K/BB around or above five. Most of the ERA numbers below three have K/BB above five as well.

For further proof, here are the top 20 K/BB ratios of the last three years, once again using only pitchers that started 10 or more games. 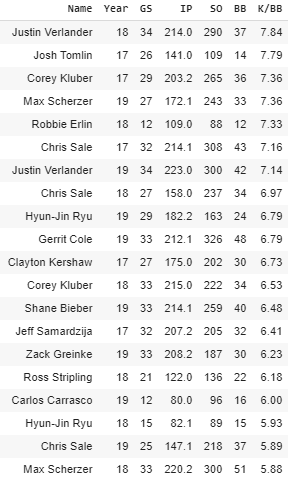 You see some surprising names there, like Josh Tomlin and Robbie Erlin. Those two got on the list more by their low walks than their high strikeouts, which is still fine, but since strikeouts matter in most fantasy leagues, we would ideally like a guy with a high K/BB ratio that is mainly due to the high strikeouts. I filtered out all pitchers with a K% below 25% and ran this again. 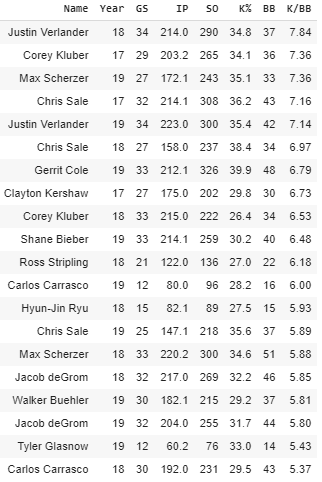 This leaves a bunch of stud, Cy Young level pitchers. Is the point of this post to tell you that drafting Justin Verlander, Gerrit Cole, Max Scherzer, Chris Sale, and Jacob deGrom is a good idea? If you are reading this, you are a premium member of FantasyPro’s and you certainly deserve better than that.

The main point of all of this is to locate some potential breakout pitchers for 2020. We want to find the guys that posted excellent K/BB ratios in 2020 but are not already near the top of the draft board. There were a lot of experts that were very excited to draft Shane Bieber late in the draft last year due to the very strong K/BB ratio he posted in his rookie season. As you know, Bieber turned out to be a top-five fantasy pitcher after being drafted very late in a lot of drafts. So, who are this year’s Shane Biebers?

Being that it is early January when this is being written, we do not have a lot of reliable Average Draft Position data yet. The names that pop as probable middle to late-round draft picks that are on this list are Ryan Yarbrough, Tyler Glasnow, Matt Strahm, German Marquez, Michael Pineda, Chris Paddack, Luke Weaver, Brandon Woodruff, Matt Boyd, and Frankie Montas. A couple of those guys are likely top 10 round picks (Glasnow, Paddack), but I think you will see the rest of those guys available after pick 100 – which could be incredible value for your team.

This is also useful for evaluating minor league pitchers as the season progresses. One of the most important elements of fantasy baseball is how to handle prospects, you can potentially add a league winner in the middle of the season for free. The jump from AAA to the Majors is really tough for pitchers, but I have found that K/BB ratio in the minors is at least a decent indicator of what it will be in the majors as well. I would invest much more heavily into a minor league pitcher with a high K/BB than one with an average or low ratio. Chris Paddack was a great example of this last year, he had one of the best K/BB ratios you will ever see in his minor league career, and sure enough, he immediately became one of the better major league pitchers, and he was very cheap in drafts last year. I highly recommend checking those numbers before you make the call to pull the trigger on adding a minor league pitcher that is set to debut.